Alaska Thunderfuck is taking us all back in time with her 90’s/2000’s inspired video (directed by Brad Hammer & Nic Laughlin) for “XOXOY2K” HERE. Alaska coo’s about “XOXOY2K” “The fashions and accessories of the early 2000s are burned into my psyche because I came of age in the time of low rise jeans and flip phones.  This is a love song about attraction and repulsion– all decorated in the mise en scene of the year 2000.”  The track is from her forthcoming Red 4 Filth album via PEG Records/Warner Music Group/ADA which is slated for release in early 2022.

The “Red 4 Filth” tour is Alaska’s first-ever headlining tour of North America and will feature her performing her entire new album along with other fan favorites with a barrage of sickening high fashion backup dancers (2000’s pop-star style) as well as feature her signature brand of comedy for a must-see show. Tickets are on sale HERE  with prices ranging from $20.00 for early GA & $25.00 for GA ADV to $95.00 for VIP/M&G and $249 for the Ultimate VIP experience.

The tour, which Alaska discusses with Access Hollywood HERE previously scheduled to begin next week has been rescheduled due to the recent Omicron variant and will now kick-off October 25, 2022 in Orlando, FL with over 30 additional dates throughout the country & Canada, including New York, Chicago (2nd show added), Los Angeles, Philadelphia, Toronto (2nd show added), and more. A full list of revised tour dates and venues is listed below. All tickets purchased for the original dates will be honored for the newly rescheduled shows.

Also, from the upcoming Red 4 Filth album release is “22,” a sweet stripped-down song with a truly endearing and uplifting message from Alaska. When asked to describe ‘Wow’ Alaska stated, “It’s a breakup song” With Alaska out of drag on guitar (red, of course) backed by the band Disciplez banging out a raw and unfiltered performance.

Alaska’s second single & video, “beautiful (Night 4 a) breakdown” HERE – is filled with all the essential emotional ingredients as Alaska explains, “I live with hysteria, tantrums, and breakdowns on pretty much a daily basis.  So this is a beautiful dance anthem that is celebrating the liberating power that you can find by being comfortable and familiar with your inner demons, rather than trying to run from them or hide them.” Watch the official video HERE.

“Red is the color of blood, and the heart, and the color of love. This song and this album are dedicated to the time when I first fell in love with music — around the turning of the century. We’re drawing upon the sounds and textures of the 90s and early 2000s, with pop songs that are about love and friendship. I love the music and I can’t wait to share it with you all.” says Alaska

Meet the Empress of the galaxy, Novaczar! 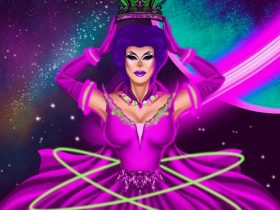