We here at Dragadventures love the creativity produced by many of you, today we present the wonderful Tara Hutchinson,  who recently put together a fantastic documentary of insight into the world of Vera Saucy, read on to find out the process.

Inspiration: I have always been fascinated by the underground art movements in different subcultures. Upon photographing Joey (Vera Saucy) at a Fetish Themed Event Photobooth, I discovered the ever-growing movement of Drag that steered away from looking like a believable woman. Joey’s punk rock meets trashy pop star aesthetic was a refreshing perspective not just on Drag, but also fashion. I attended and filmed several of Vera Saucy’s shows “What the Queer” that not only featured Drag acts, but performance art.

This included: Extreme body piercing, Performance Art, Dance, Music and a community of people that had no rules in fashion but to be weird, be yourself and be amazing. The documentary is inspired by a Cinematic Look with a grungy exterior to give the viewer a feeling that they are there in the room.*Antimity is a new production company focusing on film and documentary that explore the bizarre and weird sides of life***https://www.youtube.com/watch?v=vECmm2AvP9U

Process:The short was filmed over the span of a year and a half and follows the performances and shows of the Drag Queen and Fashion Designer Vera Saucy in Phoenix, Arizona. It follows Vera and her growing following of performers that steer away from the norm in Drag and accept any aesthetic no matter how absurd. Queens from LA to Seattle flew in to perform at “What the Queer” and showcased their unique and thought-provoking looks. Phoenix was once known as a very Conservative city, but new artists are challenging these ideas and introducing art that is attracting a growing following. 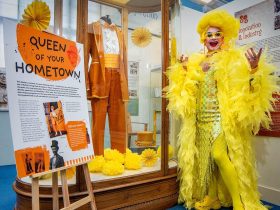